Not sure what to think 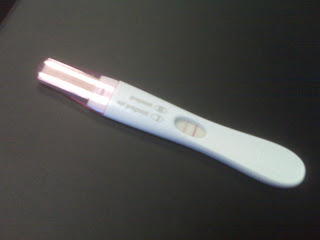 Forgive the poor photo quality (a friend at work took the picture with her BlackBerry), but I hope the photo is clear enough to show that this HPT has a second line! (If you can't quite make it out, try clicking on the photo to make it larger.)

When the nurse from our RE's office called back in response to my message about my + OPK this morning and scheduled me for an u/s, she also instructed me to take a HPT before coming in for the appointment. In annoyance, I left work and drove to the Walgreens two minutes from my office. (I even called MM en route to tell him how annoyed I was at being told to test when I just finished my period less than a week ago.)

Imagine my surprise when I took the HPT in the ladies' room at my office and saw that a second line had appeared. This is the first time I've EVER seen a second line on a HPT I've used!

When I called my RE's office back to report the + HPT, they sent me to a lab for a quantitative hCG test. I had that drawn around 12:40 and won't know the results until tomorrow. (Even the lab's "stat" turnaround time is four hours, so there was no chance of a result today.)

I always figured when (if) I finally saw that elusive second line on a HPT, it would be in the privacy of my own home bathroom with MM nearby to share the news. I didn't expect to see it a week after (what I *thought* was) my period, in the office ladies' room, after five doses of Clomid and three of Follistim.

At MM's urging, I peed on another HPT about 10 minutes ago, and it also showed a faint second line. So I guess at least I know that this HPT is not defective.

What will happen next depends on the results of my blood test. If my "number" is good, they will do a second test in 48 hours, and then if my second "number" is good, an u/s will be scheduled for the earliest possible date when something can be visualized.

I am a tiny bit excited but mostly confused and not sure how to feel or what to think. I'm more concerned about the cramping and spotting I've had now than I was before; I'm concerned about the fact that I (inadvertently) took ovarian stimulation drugs when apparently I am already pregnant; and I'm absolutely perplexed about how I could've had a usual period when I am pregnant. I've heard of these things happening, but I always figured that they happened to women who didn't know their bodies or their cycles well and simply mistook their mid-to-late cycle bleeding for a period. I definitely had full, red flow for two days.

I will update again when I know the results of my blood test.
Posted by S at 2:48 PM