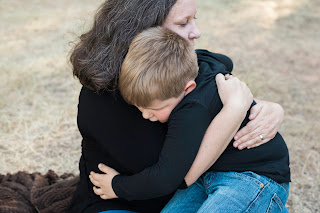 These recent photos of my son MJ and me were taken during our annual family photo session (the second photo was taken when we didn't know that the photographer was shooting). I love them because I think that they really show the love and strong bond between us. (Side note: AJ was in a mood during our session and refused to pose for any photos with me.)

Although someone studying these photos would search in vain for a physical resemblance between the two of us (MJ looks very similar to my MIL as a child), despite this lack of similarity in looks, I think that anyone would recognize that these are photos of a mother and son.

I am still active in a group for parents via egg donation, and a fair number of members of the group are either TTC with DE or still pregnant. Understandably, many of those folks wonder about how their children will feel about being DE-conceived. Some also wonder if they will feel the same toward their DE-conceived child as they would toward a child conceived with their own eggs. I happened to read one of those posts expressing doubt around the same time that I received these photos from our photographer.

I suppose individual experiences may vary, and of course, I have no basis for comparison, having no children who were conceived with my own eggs. . . but I don't think there is a way that I could love my sons more -- or vice versa -- had they been conceived with my own eggs. In fact, in a weird way, I think that the fact that I share no genes with my sons frees me to know them without preconceived notions about how they will be like me.

So, at least for me, no, genes do not matter in my relationship with my sons.
Posted by S at 9:36 AM No comments: