You may recall that I wrote here about how I was considering testing early at home on Father's Day.  I never posted a follow-up because, even after all your terrific and helpful comments, I was still on the fence about what I would do.

MM knows me so well.  He started asking me on Saturday when I was planning to POAS.  Even though I usually don't POAS, he knew that, with the stakes being this high and with there being a good likelihood that a test might actually be positive, I would be tempted.  (Neither of us are known for our patience.)

When I explained to him that I had considered testing on Sunday morning and why ("Wouldn't be cool to find out I'm pregnant on Father's Day?"), his initial reaction was to adamantly ask me not to POAS.  But as the evening wore on, he asked me more and more questions about the likelihood of seeing a "real" BFP early on. . . . and eventually, by around 9:00 p.m., he was *asking* me to POAS.

I explained to him that POAS at that time was not ideal circumstances--end of the day and I'd had lots of water to drink; only 10 dpo (days past ovulation), 5dp5dt--but he insisted.  So I obliged, and it was, naturally, a BFN.  Stark white window next to the single test line.

I hadn't been sure how I'd feel seeing an early BFN.  Historically it has bummed me out.  But Saturday night, I felt nothing.  I was just sure that I had tested way too early.

I spent the rest of the night reassuring MM over and over that this BFN didn't mean that our cycle had failed, that it was just too early to test.  I even resorted to quoting a study from fer.tilit.yfr.iend which talks about when you might expect a positive test if you *are* pregnant.  By bedtime, I think I had convinced him that there was no cause for concern, but he was still bummed.  He asked me not to test again in the morning, and I agreed.

Yesterday morning, Sunday, I woke up around 5:00 a.m. with a migraine.  (Thank goodness, it was a mild one--only moderate pain, dizziness, and light sensitivity, not severe pain and nausea--but crappy nonetheless when I can't take any of my medications for it.)  Clearly POAS was the furthest thing from my mind at that point, and besides, I had promised MM.  I spent most of yesterday napping or lying around with an icepack on my head.  I still had some pain until an hour or so before bedtime last night.

I should also mention that, unrelated to my migraine, I was also having some mild, off-and-on cramping in my lower abdomen most of yesterday, as well as an occasional feeling of heaviness.  I attributed this to my uterus, but who knows.

This morning I woke up feeling refreshed and headache-free.  After feeling completely neutral upon seeing Saturday night's BFN, I felt like I'd be OK to POAS this morning.  I told myself I'd just bury the test in the trash if it was negative, and MM wouldn't have to worry.  We are now 7dp5dt (12dpo), so I thought there was a chance of a BFP if I am pregnant.

Here's a photo of this morning's test: 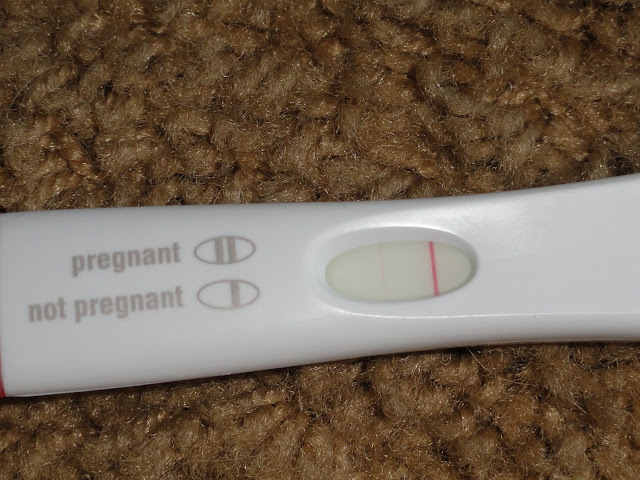 Not sure if it comes through in the photo--I had a devil of a time getting a good shot of the HPT--but there is the faintest of second lines.  I thought my mind was playing tricks on me at first, but when I compare it to Saturday night's obvious BFN, it's clear there is a second line.

So I'm feeling cautiously optimistic this morning that this cycle did indeed work and I am pregnant!  I realize there are many things which may go wrong, even between now and Friday's beta, but for today, I am happy.

(Oh, and I'm leaving the HPT on the kitchen table for MM to see when he gets up.)

EDITED TO ADD:  MM saw the HPT, and as I thought, was more skeptical than excited.  He expressed concern about how faint the line is and wasn't too reassured by my telling him "a line is a line."  He wanted to know "Shouldn't it be darker if you are really pregnant?"
Of course, he is cautiously optimistic, but I don't think he'll really believe it until Friday's beta.  Maybe not even then, LOL.
He also said "I don't think we should be telling anyone until we know for sure.  You haven't been emailing your friends, have you?"
Um, no.  I emailed my sister, I called my college friend KK and I posted here. . . . but I haven't emailed any friends.  ;-)
(So if you know us in real life, keep this on the down-low until further notice.)
Posted by S at 7:09 AM