I wanted to get photos of our sons picking out their first pumpkins, but when we headed to the nearest pumpkin patch today, we had limited time and did not want to fight the large crowd we saw there.  (Good plan, waiting until the Sunday before Halloween to go.)  So instead, we stopped at a nearby church we'd passed on the way to the pumpkin patch that had a small bazaar going on and pumpkins for sale.

Things did not go as well as we had hoped.  Our sons had fallen asleep in the car--even though it wasn't their usual nap time--and they weren't into the whole scene and starting crying after a few seconds when we put them down near the pumpkins for photos. 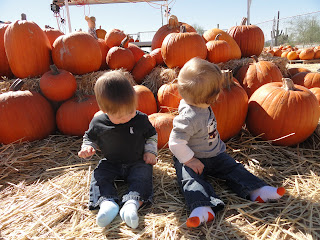 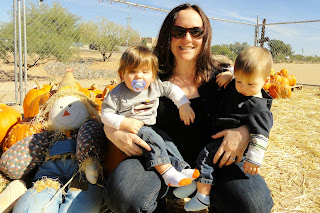 But when MM took them over for photos with them, MJ promptly spit up all over his adorable Gymb.oree shirt, and both boys started crying.  We decided to quickly pick two small pumpkins for them and finish our photo taking in the park near our house.  That didn't work well either. 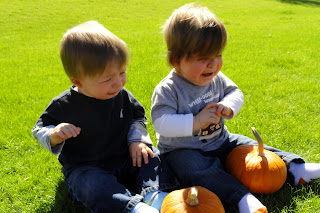 Oh well.  I am grateful for great weather here--particularly as over half the country is having storms--and grateful to have children to buy pumpkins for, even if they don't exactly love the pumpkins.
Posted by S at 5:14 PM