Although I posted an entry for Sebastian's birthday, I haven't written about how our dogs are getting along for a while. Given the fact that my Bad Karma Dog post garnered more comments than any other post I've written on this blog, I must believe that people are interested in an update.

In short, they are doing well! We had to make certain changes in our interactions with them--like removing all toys/chewbones from ready access and teaching them to sit and wait for food or to go outside--but it has paid off in spades. We have had only one fight in the past three months, and that was nearly two months ago, when I foolishly bought them the rawhide chews with "real meat" inside. (Hunter finished his first and decided he wanted Sebastian's, too, and was willing to take it by force.) There is no more tension, and no more "mad dogging" from either of them.

We were away for a week in late September, and the boys stayed home with twice-daily visits from their dogsitter. (They also have a dog door so that they can go in and out as they please throughout the day.) When we returned home, they seemed to have bonded in our absence: suddenly they were wrestling together like (overgrown) puppies, lying with their paws touching, and licking each others' faces.

An old high school friend of mine was staying with us when the "dog troubles" began in early July. She returned for another visit last week and was amazed at how well they are getting along. Here is a photo of her and "the boys." 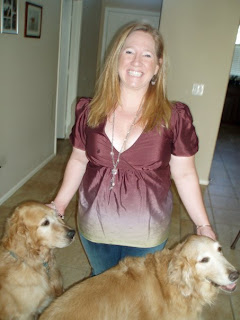 And thank goodness, Hunter's "black cloud"/"bad karma" seems to have dissipated. (Knock wood.) He has had no health issues since their medication overdose in July. His tail fracture healed without complications, and he is now pain-free and has full use of his tail. He has leaned out and lost about 4 lbs since we brought him home. His coat and skin look healthier, and even his teeth are whiter. (I did take him to my church's St. Francis Festival last month for a blessing, just in case, though.)

Sebastian is his usual self. It's sad sometimes to see how much he has slowed down over the past few years due to his mitral valve insufficiency, but he is still pretty spry most days for an 8-year-old golden and contented with life.

So there's my update on the goldens. No longer causing drama, and continuing to bring joy and entertainment into our lives. ;-)
Posted by S at 7:00 AM