(Today's post will be all about pregnancy. If you don't feel like reading about that right now, I completely understand. Hope to see you again soon.)


*************************
Total Weight Loss/Gain: I have now regained about 6 of the 9 lbs I initially lost. Overall change in weight: -3 lbs.  I'm not as worried about my lack of weight gain thus far since we had our anatomy scan and found out that both babies are an ounce or two bigger than average for dates at this point.  At least my inability to eat much hasn't starved them so far!

Maternity Clothes: More maternity pants every week, still able to wear my own shirts (though not all of them, obviously).  A couple of pairs of pants still "fit" with the Bella Band, but they aren't very comfortable anymore.

Stretch marks: I've had stretch marks for years from growth spurts and weight gain. I don't have any new ones related to pregnancy yet.

Sleep: OK. Getting up a couple of times a night to pee pretty consistently now.

Movement: I've had that fluttering feeling in my left mid-to-lower abdomen several more times over the past week. After talking with the perinatologist about the position and location of the babies at our anatomy scan, I realize that the movement I've been feeling has been from Twin B.  Twin A's placenta is anterior, so I will likely have to wait until he is a little bigger to feel his kicks.

Cravings/Aversions:  Still have lots of food intolerances, many of which are somewhat unpredictable (i.e., something goes down fine on Tuesday and then the same food makes me bloated/nauseated on Wednesday).  No real cravings.

Gender:  We are having two boys.

Symptoms: Still some nausea, though I'm having more good days than bad days with that now. (Gah, you'd think at 20 weeks that would be gone!  Actually, at this point, I've resigned myself to the idea that I may continue to have nausea until I deliver.)  Occasional heartburn and bloating, but again, not as bad. Sore, darker nipples. Haven't noticed any round ligament pain since last week.

What I miss: Having a normal energy level, being able to eat anything I want.

What I look forward to: MM being able to feel the babies' movement.

Milestones: Since most doctors consider twins to be full term at 37 weeks, I am now more than halfway through my pregnancy!  Also, I actually look pregnant most of the time now, at least to people who know me.  Although my belly wasn't small before pregnancy, it sticks out more now and is rounder than usual.  Some heavy women have this body type, but I think it's becoming more obvious.  I'm including a crappy cell phone photo of me in the ladies' room last Friday so you can judge for yourselves: 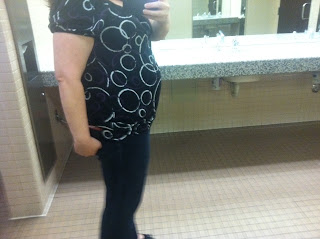 Sex?:  We've done it, and it's been fine.  I actually find that my desire is higher now than a few weeks ago (when I'm not feeling nauseated). . . but MM is concerned about "disturbing" the babies.  ("They're right there!")  LOL

Misc:  With my BFF's help, I finally made a start on cleaning out the office/nursery-to-be last weekend.  Now I just need to have MM move a few more boxes out of the closet, and we need to sell/donate the desk and chairs in there to make room for nursery furniture.

We actually have some baby clothes hanging in the closet now--not much, just a few miscellaneous onesies and the like that my MIL and I have bought--and it's pretty darn cute.  :-)
Posted by S at 5:30 AM